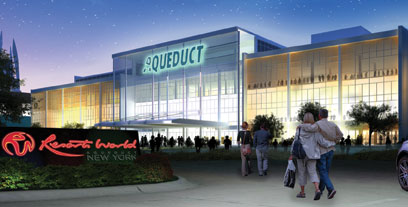 The new racino is hiring entry and mid-level employees.

A hiring center was opened last month in an effort to hire more people from the neighborhood. The company is said to hire 1,150 employees.

Local residents have already started to take advantage, like Shatima Williams and Najah Abdulkhabir but others are concerned. The Jamaica branch of the NAACP is worried that the company will not hire enough residents from Southeast Queens, which was hit especially hard by the economic recession.

The center will be open Monday through Friday from 9:30 a.m. to 1 p.m. Four RWNY staff members will be on hand to help people with the application process. Potential employees can either drop off their resumes or fill out an application.

According to YourNabe.com: “From Cantonese cuisine to Wolfgang Puck, the developer of the Aqueduct racino announced the numerous food options that will be available at the Ozone Park track.”

There will be two signature restaurants – Genting Palace, which will serve authentic fine-dining cuisine by veteran Hong Kong chefs, and RW Prime, which will feature prime steaks, fresh seafood and other fine gourmet offerings.

Both are said to have 200-person seating capacities. In addition to the signature restaurants, Resorts World is also offering an international buffet that will be able to seat 450 guests.

As Genting prepares to open the new Resorts World New York casino come the end of summer, they’ve sent out a few renderings as to what the space should look like. 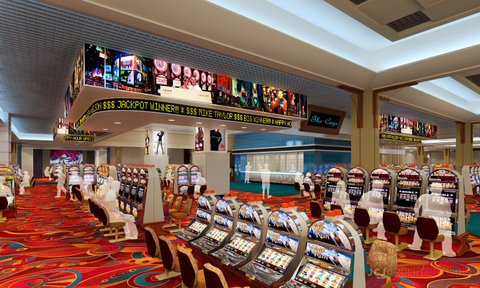 According to RWNY president, Mike Speller, the look inside,  “gives our customers just a small taste of the excitement that will greet them when they walk through the doors.” 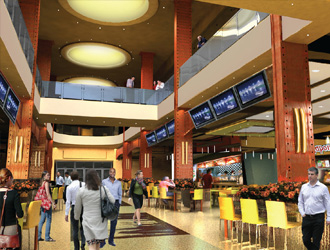 Under the schedule, 2,500 Video Lottery Terminals will be operational – rather than the 1,600 originally slated – when the casino opens in the late summer. 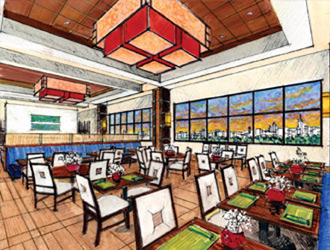 The Resorts World New York casino is opening its doors earlier than expected. Although the expected date is not yet determined, the opening is set for late summer.

According to the Queens Ledger, 2,500 video lottery terminals (VLTs) will be operational – rather than the 1,600 originally slated – when the casino opens.

According to the article, with the accelerated schedule – which will now take place in two phases, rather than three – not only will more VLTs be operational when the first stage launches, but the main entry, the international buffet and the parking garage will be part of the initial opening, as well.

So, what do you think? Excited about this development? Will you visit the casino? Or does the idea of a casino in a residential neighborhood sound like a bad idea?

Seems like Genting NY really means business. Recently the developer for the new Aqueduct Racino hired a MWBE (Minority or Women Owned Business Enterprise) – following up on the promise made last summer.
According to Resorts World, the firm’s general contractor, Tutor Perini, has MWBE subcontractor and supplier commitments totaling approximately 36 percent of the contracts awarded to date, in such specialties as electrical contracting, carpentry, security, and other services.
One such MWBE subcontract was awarded to Jamaica based company Cannady Security, Inc.
Read more here and here

Queens Borough President Helen Marshall State of the Borough Address on January 25, 2011. In this clip, she talks about the Aqueduct Racino and its economic impact.

Add another place on your list to hit this summer – the new racino at the Aqueduct racetrack.

The gaming facility is said to open this summer after the installment of 1,600 video lottery terminals. That’s just phase one.

Phase two is said to be completed shortly after and it will bring in all 4,500 VLTs as well as two restaurants – an Asian restaurant and a steak house. The facility will also house an indoor spa.

The new gaming space is said to be open 7 days for 20 hours to attract tourists, new customers and local residents.

It’s safe to say that Aqueduct vendors have a new home. The 25,000 square foot space at 221-02 Merrick Boulevard, which used to be an old warehouse, has been converted into a new flea market – the Merrick Flea Market.

Some aqueduct vendors have already made their way over to the Springfield Gardens space that was opened last fall but Brian Baxter, the current manager of the Merrick Flea Market who also managed the Aqueduct Flea Market for 33 years expects to see more.

“Aqueduct had between 600 – 800 vendors at any given time. With about 125 – 150 total spaces here, we’re about 75 percent full and we can attribute about half of them to the old Aqueduct vendors,” he said.

Many vendors at Aqueduct are either out of a job or hoping for another space and the Merrick Flea is located conveniently in Queens where they wouldn’t have to travel far and where customers, who receive free parking at the market, could also follow.

Although promises were made by Senator Addabbo and the Queens Borough President, Helen Marshall, to find a new space for the vendors, Baxter said that to find a place similar to Aqueduct would be almost impossible.

“It’s so big, any property that large is not going to be zoned for a flea market,” he said.

The Plain and Fancy company that used to run the Aqueduct Flea Market has a confidential client list so Baxter has to promote the Merrick Flea Market to vendors using the contacts he has formed and is close with.

“I have to depend on my own contacts as well as word of mouth to spread the word to vendors out of work. But many of the vendors know one another, like a big happy family,” he said. It’s a workable strategy to get more vendors there in the coming months.

The Merrick Flea Market is an indoor market that will be open year-round on Thursday, Friday, Saturday and Sunday.

Avneet Bindra packs up for the day. As dark sets in at 5:30 p.m. on a windswept evening in early winter and vandalized trucks pull out of the Aqueduct racetrack parking lot, the 22-year-old upstart folds up the wares from his blanket business. He motions to his father, Rumpy Bindra, who has manned a separate blanket business in the market for 25 years, asks the older Bindra if he needs space on his truck. They are among last few vendors who have held out on this bitterly cold December day in Ozone Park.

Bindra has grown up in this flea market, learning the tricks of the trade from his father. The iconic flea market, which has operated out of the parking lot of Aqueduct in Southwestern Queens for 30 years, is a noisy and sprawling hub for 500 vendors, many of whom are Indian, Guyanese and Caribbean immigrants making their way up the economic ladder by hawking cheap bargains to other immigrants. Now Bindra, who is paying his way through college with this business, is bracing himself for December 31, when he has to uproot his shop…

Several racinos are calling on Gov. Andrew Cuomo and New York State to re-evaluate a casino compact made between former governor Paterson and an out-of-state Indian Tribe toward the end of his tenure in November.

The compact, agreed upon between Paterson and Wisconsin’s Stockbridge-Munsee Community Band of Mohican Indians, involved a land settlement, which would enable the tribe to develop a casino with games and slot machines in the Catskills.

Racinos, including Resorts World New York, Saratoga Gaming& Raceway and Empire City/Yonkers Raceway, sent  a letter yesterday to the Governor’s office, the NYS Department of Budget and Division of Lottery, calling for an immediate reevaluation of the agreement.

If built, the casino would also pay far less taxes on slots and table games, which are more attractive than video lottery terminals and are state-sponsored. Racinos pay taxes of 60-70 percent on video lottery revenues while Indian casinos pay 18-25 percent.

“The reduced tax structure provided not only immediately reduces state tax and education funding, but creates a structural competitive advantage that cannot be overcome because Indian casinos have the ability to offer free room, food and beverage because of the low tax rate … Racinos cannot and will not be ale to effectively compete,” the letter stated.