Avneet Bindra packs up for the day. As dark sets in at 5:30 p.m. on a windswept evening in early winter and vandalized trucks pull out of the Aqueduct racetrack parking lot, the 22-year-old upstart folds up the wares from his blanket business. He motions to his father, Rumpy Bindra, who has manned a separate blanket business in the market for 25 years, asks the older Bindra if he needs space on his truck. They are among last few vendors who have held out on this bitterly cold December day in Ozone Park. 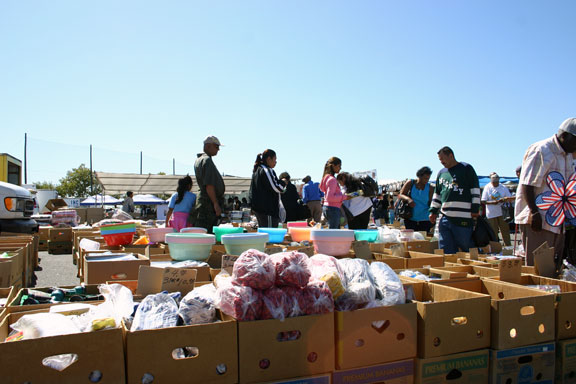 Bindra has grown up in this flea market, learning the tricks of the trade from his father. The iconic flea market, which has operated out of the parking lot of Aqueduct in Southwestern Queens for 30 years, is a noisy and sprawling hub for 500 vendors, many of whom are Indian, Guyanese and Caribbean immigrants making their way up the economic ladder by hawking cheap bargains to other immigrants. Now Bindra, who is paying his way through college with this business, is bracing himself for December 31, when he has to uproot his shop…

Several racinos are calling on Gov. Andrew Cuomo and New York State to re-evaluate a casino compact made between former governor Paterson and an out-of-state Indian Tribe toward the end of his tenure in November.

The compact, agreed upon between Paterson and Wisconsin’s Stockbridge-Munsee Community Band of Mohican Indians, involved a land settlement, which would enable the tribe to develop a casino with games and slot machines in the Catskills.

Racinos, including Resorts World New York, Saratoga Gaming& Raceway and Empire City/Yonkers Raceway, sent  a letter yesterday to the Governor’s office, the NYS Department of Budget and Division of Lottery, calling for an immediate reevaluation of the agreement.

If built, the casino would also pay far less taxes on slots and table games, which are more attractive than video lottery terminals and are state-sponsored. Racinos pay taxes of 60-70 percent on video lottery revenues while Indian casinos pay 18-25 percent.

“The reduced tax structure provided not only immediately reduces state tax and education funding, but creates a structural competitive advantage that cannot be overcome because Indian casinos have the ability to offer free room, food and beverage because of the low tax rate … Racinos cannot and will not be ale to effectively compete,” the letter stated.

As the Aqueduct Flea Market sold its final bits of affordable vintage clothing, jewelry and other necessities during the last two weeks of December, vendors still find themselves with nowhere to go.

The market was forced to close its door before Jan. 1.  because it didn’t fit in with construction plans scheduled for this year. Malaysian company, Genting, broke ground in October to start construction of the new racino gambling complex. As vendors rallied outside the flea market entrance during the groundbreaking ceremony, their protests were futile.

One vendor, Melissa Steadman, is unsure of what will happen. Her family has been selling used clothing at the market for over 10 years.

Queensborough President, Helen Marshall and Senator Joseph Addabbo, who represents the Howard Beach and Ozone Park area, are working on finding a new space for the 1,000 plus vendors.

Live racing will occur as scheduled on Friday, January 7.